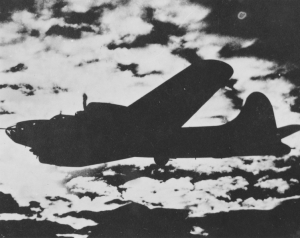 A B17 “Flying Fortress” against a clouded sky. Dad says they also called these planes “Big Ass Birds” because of their large tails. Photo by James E. Rung.

Disembarked Liverpool, England on July 13, 1944 and proceeded to reception center at Stone, England.

Departed Stone on July 17, 1944 and proceeded to permanent base at Kimbolton, England.

Departed Chorley January 31, 1945 and proceeded to

At this point the entry ends.  Dad had to turn his log book in and was unable to complete his entry about his return trip home.  He cannot remember exactly from where he departed England to return to the States but he think it was probably Southhampton.